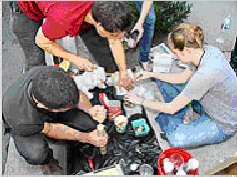 Researchers, left, glued electronic tags to the trash items they had sorted through and selected to track. The items will be followed through the waste disposal system.

Karin Landsberg, 42, a self-described “eco-geek” in Seattle, was so curious that she invited researchers from the Massachusetts Institute of Technology into her home last month to fish 12 items out of her garbage and recycling bins — a can of beans, a compact fluorescent light bulb — and tag them with small electronic tracking devices.

Her trash is now on its journey to the place where it goes to die or be reborn.

The Architectural League of New York went through a similar trash-tagging exercise as part of the same project when it moved its offices from midtown Manhattan to SoHo two weeks ago. Among the discarded items tagged were a coffee cup, a filing cabinet, a book shelf, a broken wine glass and an empty plastic bottle that had held liquid soap.

“All they can tell me up to this point is that some of the stuff has gone through the Lincoln Tunnel,” said Gregory Wessner, director of digital programs and exhibitions for the league. “It is on the move. We’re really excited to know what happens.”

What a waste of effort! – PP