The invention of the strong, thin-walled, polyester soda bottle has revolutionized soda beverage sales. It can fall or be thrown into a market basket and never seems to break or crack. Yet it suffers from one defect, at least from the point of view of the consumer (not the seller). The contents, especially for the two-liter or larger sizes, are capacious and so probably need to be consumed over some period of time. The only way to pour from the bottle is to open the cap which first opens the head space above the liquid to the atmosphere, allowing any free carbon dioxide to escape immediately. Do this a few times and most of the carbon dioxide is gone, leaving the rest of the soda flat. So its probable fate is to be discarded, which is just fine with the manufacturer of the bottle and the filler.

Let’s not adopt the wasteful attitude of the sellers and let’s put aside for now the question of whether an obese society should be consuming vast quantities of high fructose corn syrup for no reason. Let’s just look at this as a packaging question and ask how the package could be improved.

Do you remember those seltzer bottles of yore? 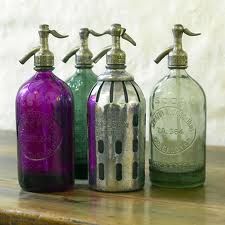 They were made of heavy glass with a metal cap. There was a feed tube that extended from the cap down to the bottom of the bottle so that when you pressed the handle in the cap, the seltzer was delivered from the bottom of the bottle, not the top. The carbon dioxide didn’t escape until the bottle was empty. These bottles were expensive and so the empties were put outside for the seltzer distributor to pick up, refill and sell again. Doesn’t that sound like a zero waste approach?

Don’t forget the principle that I always like to emphasize. When a product is used over and over again, it can be made robust and given all kinds of features that can’t be afforded for a disposable product. In this case, heavy construction that uses up all of the carbonated contents. My subjective impression is that the heavy seltzer bottles delivered a more heavily carbonated product than contemporary lightweight bottles. I would guess that the lightweight bottles could not handle the high pressure that the seltzer bottles could.

I have no doubt that the disposable bottle manufacturers would be willing to add in a special feature of a valve in the cap that would allow the bottle to be turned upside down and dispensed in a way that would keep the carbonation inside. This would be one more feature to be used once and then discarded, which doesn’t bother them in the least. The more plastic you throw away, the happier the plastics manufacturers are. However, the cost of the valve would have to be added to the price and that would not be desirable. Besides, having half the bottle go flat prematurely is much better for sales and avoiding that would be resisted.

One kind of halfway Zero Waste solution would be to market a product, that I have never seen commercially, which would be a delivery cap, similar to the old seltzer delivery cap, with a tube reaching down to the bottom of the bottle and a lever for dispensing. It could be screwed on airtight to each fresh bottle of club soda or soda or even beer and would conserve the carbonation during delivery. It would introduce the necessity for washability. Making this product would be a kind of Zero Waste business since it would reduce the discard of flat soda, though it would do nothing to eliminate the discard of the bottles.

The better Zero Waste solution: redesign the bottle/filling/delivery system to eliminate disposable bottles in favor of stronger, robust, refillable bottles which could now incorporate useful features that are too expensive for a bottle that will be used only once. Have the consumer refill his own bottle in his weekly trip to the refilling store so that no one else gets to contaminate it, and let the bottle manufacturers go to hell! We don’t need them to make unnecessary waste. Let them get a real job!