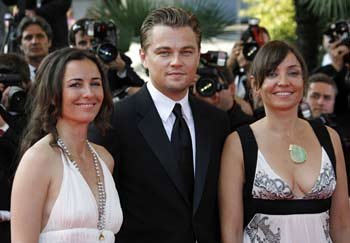 INTERVIEWS WITH THE DIRECTORS

Tell us about your purpose in making The 11th Hour.

The whole point of the film is to get people to have a clear understanding of the state of the planet. If you understand something you’re better able to react to it.
People are not getting the information they need or it’s blurred by special interests so that the real message is cloudy. We wanted to create a film that explained the situation very, very clearly, so that then people could make a decision. Now whether or not they make a decision toward sustainability remains to be seen, but we are convinced that life loves life it’s a biological drive called biophilia — and that once we clearly understand that life is in jeopardy across the board, that we’ll choose to move in a direction that supports sustainability so that all life can continue on this planet.

Biophilia that’s a new word for me.

Edward O. Wilson, who appears in our film, wrote a book about Biophilia, the hypothesis that rooted in our biology is a deep attraction to nature and life, that life loves life. Life doesn’t tend toward destruction unless there’s something out of balance. So cooperation really is the underlying fundamental activity of life on the planet. The reason why evolution happened was because bacteria started cooperating, rather than fight. And the same thing with all of life, all human society is basically cooperative.

So out of the principle that life loves life, you have faith that humanity will find a way to get past these political structures and find a way to survive?

I don’t believe that people maliciously wake up in the morning saying I’m going to hurt the earth today or I’m going to trash the earth or whatever. All of this is simply a byproduct of the way we constructed society. The industrial revolution, the discovery of oil, has given us so much power that we have to learn how to use it correctly without it being destructive. So we just have to redesign our society at every level so that it doesn’t destroy the planet.

The movie talks about a tipping point. What are some examples of unexpected impacts that could make the situation worse than scientists expected?

Well one of them, which is the scariest one I’ve heard, is the absorption of carbon into the ocean. Basically the ocean and the atmosphere both absorb carbon, but the ocean absorbs more carbon than the atmosphere does. One of the scientists, Jeremy Jackson, said that there could be so much carbon absorbed into the ocean that it changes the chemistry of the ocean to acid, which then will prevent plankton from producing oxygen, which then turns the entire world into an anaerobic world, which means we’re back to when bacteria were the only things that could survive on the planet.

We don’t know. But why find out? You know, people will take out fire insurance for less than 1% chance that their house is going to burn down. But if there’s a 10% chance of a catastrophic outcome from climate change, there are still people saying you need to be 100% sure about all the outcomes before we do something about it. Would you get on a plane with a 10% chance that the rivets are going to pop off the plane? I mean why are we gambling with the planet’s life support system?

So what can we do to increase the odds for the planet?

We need to rapidly reduce our reliance on fossil fuels. That’s the number one thing. We need to go solar in as many ways as we possibly can. The other thing we can do is consume a whole lot less, because a lot of things that we do are completely wasteful. So this is not rocket science. This is simple plain old conservation, efficiency, you know, and a little innovation. It’s certainly doable technically.

How do we begin to implement change on a global basis?

So basically you’re talking about “Glocalization”  tackling it at a local and global level at the same time.

I like that word.  I’ve never heard that before. Eventually it’s going to make more sense for companies to be green because fossil fuels are going to cost a lot of money. DuPont already has changed one of their plants into a biofuel plant. If companies don’t learn how to adapt now, they’re just going to be left behind.  I think a lot of companies are realizing that, too.

Very good.  So what’s your next project after this film?

The mission of our company is the use of stories to put new ideas into the mediasphere  the ecosystem of ideas. We have a couple of projects in the works.  “Original Instructions” is about nature’s operating instructions, that we can look to nature for all the answers to save the world.  And there’s another movie I’m developing about how mushrooms are basically going to save the world.

You have to wait for the film for that one, but basically mushrooms can eat anything from toxic waste to heavy metals or radioactivity.  They just have a lot of chemical defenses that we can use to remediate polluted environments, as well as to manage insect control.

So once the world finds the political will to turn this around, there are incredible tools at our disposal to do so.

They’re here now, political will or not. It’s my opinion that the politicians are going to be the last ones to find out what’s going on because it’s happening now.

It’ll be like Gandhi said:  “There go my people. I must follow them. For I am their leader.”

Click here to read the entire interview. (Note: In these archives you will have to register for free, giving only your email address, and then search for 11th Hour)