In our world of wastefulness, dominated by the drive to get rid of garbage by any means possible, mattresses loom large (after rubber tires). They are bulky, heavy, hard to move, hard to simply use for anything once they become soiled or contaminated and they don’t fit into a standard garbage can. Therefore the roadsides of this country are littered with abandoned mattresses in the millions and the costs that cities and counties face for picking them up and bringing them to dumps is in the tens of millions of dollars. 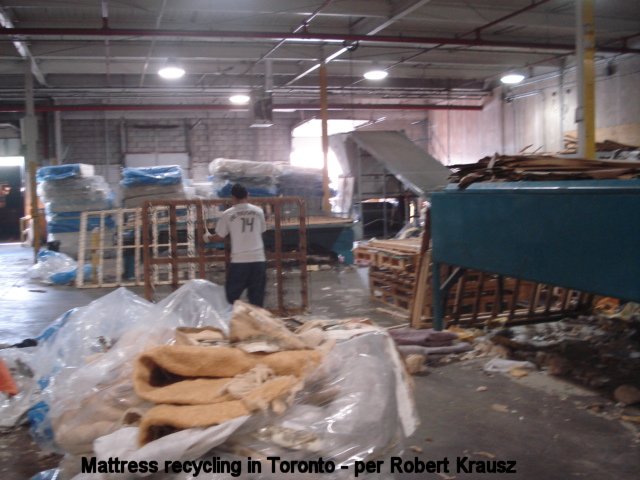 In this picture of a mattress recycling facility, you can see many problems. The work is manual, it uses centuries old hand tying techniques, mattress materials are scattered around, the work is dusty and the work site is relatively uncontrolled. Is this the best we can do?

The recycling answer is yes, this is the best we can hope for. Since recycling accepts cheap, quick design and assembly which makes no provision for reuse, and then attempts to swim upstream to force reuse on something that has been designed for discard,  the poor worker in this picture has no good options. Obviously  the way to improve reusability is to change Design for Discard into Design for Reuse.

There are legions of ways to improve the design of mattresses. Instead of sewing, introduce zippers or velcro closings so that mattress interiors are easily accessed. Stop using staples to attach batting to wood and use standardized fasteners that are easily opened. Make sure that rigid components can be disassembled so that one broken slat can be easily replaced. Require minimum strength for rigid components. Standardize the materials and methods of construction across all manufacturers so that a common approach to reuse will work for all manufacturers. This is standard ZW redesign, according to the ZW Principles.

The details will require research and consultation by everyone in the mattress design and manufacture business. The key is not how to do it but how to generate the will to do it. This question is also not unique to mattresses.

Mattresses and rubber tires, through their intractability, give the lie to existing claims of sky-high recycling rates, currently being made by San Francisco and other cities. Only by ignoring the serious problems arising from thousands of problematical products like mattresses can these claims pass the laugh test, and even then … The latest way to “solve” the problem of pumping up recycling rates artificially, is called EPR (Extended Producer Responsibility) and it is no more than a scam for shifting responsibility away from cities onto someone else. Anyone else! But in this case, the new responsible party is the manufacturer (or distributor or assembler or wholesaler – no one can say). By shipping problem products back to a third party, their pesky refusal to be recycled doesn’t need to be included in the announced recycling rate which can then be pushed ever upwards.