Oct, 2014 – A chemical trade magazine* reports the creation of a new company, Celtic Renewables, to make valuable solvents from the fermentation byproducts of Scotch whiskey production. There seems to be a lot of that in Scotland.

After distilling off the whiskey, two byproducts have traditionally been left. One of them, for you Scrabble players, is called draff. The other is pot-ale. Until now, they have been used, on a good day, as a soil amendment. On a bad day, they go into the sea. 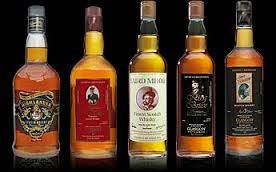 Before World War II, Chaim Weizman, a chemist and the first president of Israel, had developed a similar fermentation process for making solvents from alcoholic distillation residues. At one time it was widely used but cheap solvents from petroleum sent that process into a tailspin.

Scotland produces about 400 millions gallons of pot-ale and half a million tons of draff each year. This quantity is small by industrial chemical standards but if combined with other brewing residues it is enough for a single company to process economically. In the production of other biochemicals, up to 90% of the cost of goods can be in the biological raw materials. Here that comes free, at least for now.

Celtic Renewables has developed a particular microbe that can create three solvents: acetone, 1-butanol and ethanol. While these have value as gasoline additives, they have a greater value as synthetic chemicals than as fuels. There are some other small companies whom Celtic Renewables counts as potential competition but for producing slightly different outputs.

The managing director is quoted as having a view that his company is a waste processor. This is an unfortunate blindness, which will hopefully fade away. Why should anyone consider a former foolishness as the definition of a process? What is so compelling about garbage production that its memory must be preserved, even when a more rational design process has created an integrated design which produces nothing that is wasted?

Whiskey sales account for a huge factor – one-quarter, US$7 billion worth – of all of the UK’s exports of food and beverages. Could this new process become so remunerative that it could overtake the value of its former principal product? Could whiskey become the “byproduct”? Time will tell.

In any case, as this new process becomes established, it will simply be part of the unified process for converting grain into multiple products and no trace of “waste processing” will remain. This must happen with all industrial processes, not just chemical ones.

We ask ourselves a question that does not occur to the managers of Celtic Renewables or their competitors or backers or anyone else. Is this newly designed process a Zero Waste success? Has the industrial process been redesigned to create only products which will be used in such ways that the very mode of their usage will not generate garbage? It happens that every one of the products, whiskey, acetone, butanol and ethanol, are meant to be consumed in use. Therefore their mode of usage is beyond the scope of our decisions. it will be up to the industry that uses the solvents in a downstream product to make those arrangements. For our purposes, this can be counted as a legitimate zero waste redesign.

See also David Blume‘s comprehensive book Alcohol Can Be A Gas for another view of using fermentation residues,