Freshwater is a critical resource that we need to conserve along with other resources.

Although 70% of the earth’s surface is water, most of that is saltwater. Only 2.5% of all water is freshwater and of that, most is locked up as ice or deep underground. Less than 1% of all surface water is freshwater. Out of this tiny amount of water, we need to use it for drinking and washing and personal agriculture or else we are in trouble. And yet the far greater use is for industrial production, industrial agriculture or mineral extraction, such as in fracking. Generally, the only way to have an impact on available water is to make changes in its industrial uses. However, there are a few ways to locally capture some of the water that happens to be under our personal control.

The most important change we can make is to use less water, rather than trying to supply our profligate usage patterns. This is a universal theme. For a full treatment, see Green Illusions by Ozzie Zehner.

After reducing our usage, unless we have a personal creek on our property, or live in a very rainy location, this comes down to capturing more of the rain that falls on property under our control. The easiest way to capture water is to collect all the rain that falls on our roofs and place it into large tanks, then use it as needed. Those readers in Australia are fortunate to have suppliers like Rainwater Tanks Direct that provides a wide variety of tanks for capturing rainwater. 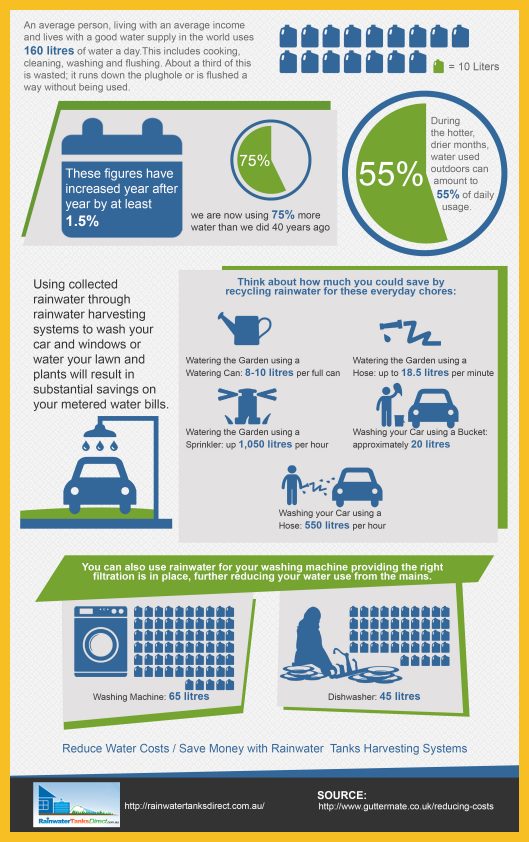 Across the globe there are many companies specializing in rainwater catchment systems.  Use Google to find many of them.

Can water be saved and recaptured and reused?  Since we are talking about an amazing material with many special properties, of course we can. The entire developed world uses systems of capturing sewage, taking it to a central wastewater treatment plant and purifying it. Most people probably think that that is the acme of innovative, conserving methods for reusing a scarce resource, and to some extent such plants may deserve a vote of admiration. Yet these plants are part of a complex system and many of the assumptions of that system are backward, because they reflect the garbage mentality that penetrates every facet of of our societies. It says that getting rid of a once used resource is the goal of any system. Then, a wastewater treatment system, no matter how enlightened its management, is swimming upstream as it tries to undo the wasteful assumptions that send it mixtures of every kind of contaminated water – with industrial pollution, pharmaceutical pollution and more – and expect the plant to perform magic. Then the solid matter that the plant separates out is too contaminated to use for growing crops and the water is simply discharged into some large, local body of water, such as an ocean, to get rid of it. I will not take this discussion further here, except to point out that conservation of resources always depends on excising the garbage assumption and starting your concerns at the beginning, not  expecting to magically undo the damage of the garbage mentality when it is too late.