Let us apply ZW thinking to bottles and containers. The first question we need to ask is this: What is the FUNCTION of a bottle or container.

The simple answer: they contain!

So how should we redesign the system of creating, using and reusing containers in such a way that it is the FUNCTION and not the MATERIALS that are being reused.

The answer could not be simpler: refill the containers with their original contents!

At this point, we need to consider how we could create a business that would allow consumers of the contents of containers to refill them.

First what is the WRONG way?

That would be the deposit route. Set up a system (already in existence in some places) to have all containers go back to a central collection location, such as the supermarket that sold them, that would ship them back to a washing and sorting and refilling facility in some distant state, after which they would be sent back to the same supermarket to be sold, repeating the whole cycle. Many people, when considering refilling mean exactly this process and cannot conceive of any other.

While this long distance refill process seems to achieve the desired result, it has many serious drawbacks. In general, it is extremely wasteful and therefore cannot be said to be a ZW proposal. First, it does not maintain an unbroken record of responsibility, substituting a collection process in which no one is actually responsible. This allows the user to abuse the container any way that she wants.

In addition, this scheme necessitates excessive transportation to and from a distant refiller. Another problem is that the collector location is not set up for collection, does not get paid enough, if at all, to motivate him to care much, and often just opts out entirely from the system. This is all a consequence of the loss of responsibility. Another word for any product that no one is responsible for is garbage. The scheme also has the effect of reinforcing our current preoccupation with excess and unwanted packaging. All things considered, this is an entirely unworkable scheme that has no chance for any success. It is basically a garbage-based scheme with a few added greenwashing wrinkles.

Unfortunately we had to spend a lot of time analyzing this common deposit system because it has become so widespread. So what system can we propose that solves all of the above problems and conforms to the ZW Principles?

Once again, the answer is staring us in the face. Since we cannot break the chain of responsibility, it is the user (or consumer of the contents) which must take responsibility for washing out and for refilling. Thus someone with a stake in the reuse of the container is always in control of it. There is no longer any opportunity for mischief or a lapse or an unreported defect. In the vast majority of cases, the washing process will now be simple – just a rinse, since the history of the container will be known to the user. There will be no escape into irresponsibility to suggest to a wavering user that the container can be treated like garbage. In certain cases, the user may not have access to the kind of washing facility that is needed so any proposed scheme must make some heavy duty washing available in special cases.

All of these new requirements are easily provided by a simple scheme. An additional advantage of the solution is that it shows the need to create a new business, a ZW business, which can be put in place initially without the extensive involvement of government.

All we need to do is to create a refilling center in every community. Let us abandon the marketing principle that every distributor must provide a package (and then another and another) for every product. Let us instead adopt the principle that every customer will bring in her own package and establish only a way for her to fill it.

I have in mind a store resembling a supermarket but filled with filling nozzles of many descriptions. In fact, designing the actual filling nozzles is a challenge that needs to be met in a grand paroxysm of redesign with mechanical, social, commercial and political aspects. How to acquire, store and connect the bulk sources is part of the design. In another sense, there is nothing new here. Every contemporary gas station has solved all of the problems. Every bar likewise dispenses draft beer from such a device. What is needed is not the solution to some difficult problem of design but primarily the will to do it.

The payment options are just as simple as any supermarket bar code reader. Each shopper could have a plastic card that keeps track of all her purchases as she fills her containers. The card would be inserted into a reader connected to each nozzle. Electronic scales are cheap, so each filling station could have an individual scale beneath the nozzle. The scale could record the empty weight of each container and then record the filled weight, putting the price of the purchase on the plastic card. When the shopper finishes, she takes her card to the checkout counter to pay for all her purchases and receives a detailed receipt. For a manual backup, each bottle could have a permanent label stating its empty weight.

Another payment method could resemble gas station readers for credit cards. Each bottle filling could directly debit a credit card so that there would be no need to visit a cashier afterwards.

Mention was made above of a heavy duty washing facility. The store could provide a hot water or steam spraying nozzle that a bottle could be turned over onto. Various safety features are also contemplated.

In order to extend the life of glass bottles in this scheme,  breakage needs to  be reduced to a minimum. This problem is already  being dealt with by Life Factory who make a series of perforated, soft silicone sleeves for protecting glass bottles. In order to maximize the match between sleeve and bottle, we are once again faced with that favorite trick of  Zero Waste design – standardization. By standardizing sleeve and bottle designs so that one fits many, these easily removed sleeves can be widely used.

I hope this shows how relatively simple it would be to create a zero waste system for refilling containers that would involve no heavy washing, no distant transportation and no personal lessons in shucking responsibility for our buying choices. 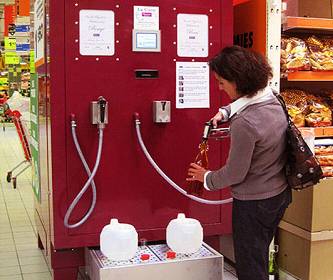 At a kiosk in France, a lady fills her wine bottle.

This is what the environmental newsletter Grist had to say about it:

Carrot vending machines are pretty nice. Wine vending machines
are even nicer. And the nicest of all is the machine that lets green-minded winos buy their Bordeaux blends in bulk. Just BYOB — bring your own bottle — and fill ‘er up for about $2/liter.
Yes, you may soon be able to guzzle down all of the planetary benefits of buying in bulk from pump-your-own tanks of wine in grocery stores. Waste not, wine a lot, no?

Started at eight grocery stores across France, rumor has it that these tanks may be jumping the pond over to some U.S. supermarkets in the next year. For those who are visual learners (aka don’t parlez-vous francais), see step-by-step photos of the brilliantly simple process. And if the French customers imbibing this re-innovation don’t look down their noses at the unbottled joys of bulk wine, why can’t we?

Those clever Europeans — always coming up with innovations to drink as much as they want with as little packaging as possible. They’ve even carried it as far as public water fountains that bubble up sparkling water.

Personally, I’m waiting for the kind of fountain that serves a good Syrah.

And in San Jose, Costa Rica, I found a bulk detergent refilling machine so that people don’t need to throw away (yuk!) heavy plastic jugs after one use. 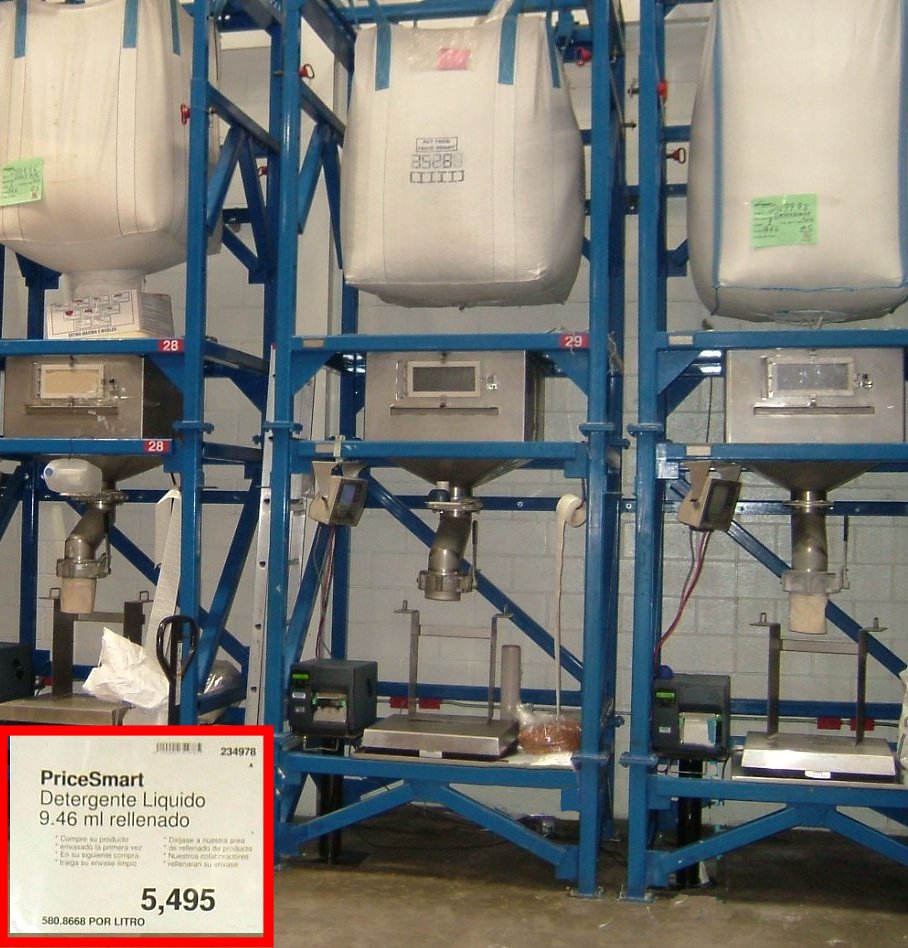 Recently (2020) I found a multi-nozzle filling station in Durham North Carolina called Pour Tap. I was told it is a franchise so there are several more. Here is an overview.

As you can see there are about a hundred nozzles all dispensing – not paint thinner or milk but – BEER! Well, it’s a start. Did you know there were so many kinds of beer? I found three Milk Stouts, my favorite. How is this like the ultimate refilling station? Three similarities come to mind.

One, there are bulk containers of each kind of beer behind the wall somewhere, connected to the nozzles by tubing.

Two, as the product is dispensed from the nozzle, it is measured (in this case by the ounce). For general use, a weight measurement would be less limited. Under each nozzle there would be a simple electronic scale. a happy customer. )

Three, the design includes an electronic card (in this case, a wristwatch like device) which records which product is being delivered and what the total cost is.  Even beers come in many prices. So there would be no need to laboriously record all the products and their costs being taken from the many nozzles. One little device reads out the total cost to the customer for payment.

Thus we see that the concept of a refilling station is nothing revolutionary. We already have many examples, but none of them are specifically targeted at eliminating waste and packages. The changes still needed for a generic refilling station are attitudinal.

The local store called Alfalfas in Boulder has adopted refilling as its method for selling many liquid or pourable products. In their own words: