Take this test. Which of these two pie tins has the highest reuse potential, using less energy and labor? The one on the left can be used over and over for baking pies. If it ever is ruined, then it can always be recycled as aluminum. The one on the right is just a lump of aluminum. The only way to reuse it is to ship it a thousand miles away to an aluminum smelter, where a great deal of energy will be converted to heat to melt it, more energy used to cool and roll it into sheets, and form it once again into a pie tin. Choose one.

Did you choose the recycling path? In that case, maybe you made a big mistake coming to this website. But there’s still hope. Look at our pages devoted to Principles, Greenwashing, Newsletters, Projects and others and take the test again.

You probably could see the enhanced level of reuse for a functional pie tin and chose the lefthand picture. But that just brings us to the money question: How could we design that pie tin to be even more reusable? Let’s brainstorm!

This is the kind of brainstorming that needs to take place for every product in use anywhere. Whether a hammer or a solvent, they can all be thought about using the new constraint of Zero Waste, which can be summed up thus – what if there was no such thing as throwing away at all and everything had to be reused endlessly? How would you design for that?

This website emphasizes the positive. We present solutions, not problems. But just for a moment, we take a short side-journey into negative land to expose false reuse.

DON’T BE TAKEN IN BY THE RECYCLING PROPAGANDA ! Sir Ken Robinson, an educator states: “Many ideas that are obvious turn out not be true” (hear his talk) 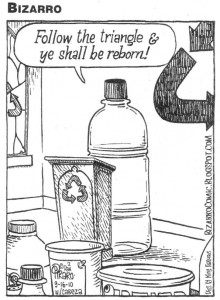 Hopefully this is the last time we will ever mention garbage on this website. (Yes, I know, I keep saying that). The world of garbage has nothing whatever to teach us. Unlike recycling, Zero Waste never concerns itself with garbage management and never compares its principles to garbage creation. Zero Waste stands on its own as full-fledged theory of reuse.

Recycling is just one example of an unfortunate approach to solving problems. Read more.

Did I mention that recycling, which has no evidence to support its claims, is basically a religion? Here’s what the Florence Alabama Times-Daily newspaper recognized about recycling in their city on December 11, 2014:

For some households, recycling ranks as a patriotic duty just below voting and displaying the United States flag.

So disbelief was a natural first response when a Florence councilman recently raised the issue of whether recycling makes economic sense.

Maybe a better response is to credit Councilman Barry Morris for diligence in holding government accountable, but then counter his arguments. The public can decide if recycling makes sense — even if the cents aren’t always obvious.

Usually, the whole reason for recycling is that it makes money. But if it doesn’t, it’s still  a PATRIOTIC DUTY!!!

Buckminster Fuller had this to say about recycling (he was so diplomatic, he didn’t want to say recycling so he said fortuitous contrivings instead):

“I am enthusiastic over humanity’s extraordinary and sometimes very timely ingenuities. If you are in a shipwreck and all the boats are gone, a piano top buoyant enough to keep you afloat that comes along makes a fortuitous life preserver. But this is not to say that the best way to design a life preserver is in the form of a piano top. I think that we are clinging to a great many piano tops in accepting yesterday’s fortuitous contrivings as constituting the only means for solving a given problem.”

This just in! Hurrah! Recycling CAN work for you!

So the best investment advice is to drink heavily and recycle.

In recent years, recycling has come in for some major criticism as its drawbacks slowly percolate into the general consciousness. Here for example is a hit piece on recycling. I don’t know what motivates the writer though I suspect he may be a climate denier who wants to branch out. Most of his criticisms are superficial but he correctly criticizes recycling being talked about like a superhero (a religious icon). And his last point is the same as ours – recycling creates a counterproductive attitude that garbage generation is okay. Go here: Recycling is non-sustainable.

Also see: Can Recycling Be Bad For The Environment?

The above article has this amazing admission … “Every year, reports come out touting rising recycling rates and neglecting to mention the soaring consumption that goes along with them. American consumers assuage any guilt they might feel about consuming mass quantities of unnecessary, disposable goods by dutifully tossing those items into their recycling bins and hauling them out to the curb each week.”

and: When Recycling is Bad For The Environment

and: Is Recycling Bad for the Environment?

There are more every day. Just Google Recycling Bad For Environment. None of these writers would be caught dead recommending redesign for reuse, something that, unlike recycling, is genuinely and abundantly excellent for the protection of our planet. The trend is turning, as recycling centers are being closed all over and their economic foundation is criticized. From 2019 – Recycling Is Broken