Here are some examples of practical ways that the principles of Zero Waste can be applied to a number of situations,  products and inefficient designs.

In each case, I extract the function and find a way to satisfy that function with no discard, or at least minimized discard. In no case do I search for a way to make use of a waste product.

My hope is that by creating better designs, which last a long time and are personally satisfying, older, wasteful, shoddy, conventional products will be edged out, will be made obsolete, and new, Zero Waste designs will take over. This page is intended as a plan for a small part of the future.

The old world is crumbling and we still have no idea of what the new world will look like.
If you don’t have a plan, you become part of someone else’s plan. We must decondition our minds from ten thousand years of bad behavior.

Terrence McKenna,
The Taxonomy of Illusion

Some people object that the planned obsolescence model really works and is more effective than products built around robust design. They talk about market share. In response, I point out that we are not competing on the basis of seeking a 75%, or 50%, or even 20% market share. Starting out, a 1% market share is the goal, and the market rules for that are quite different and more welcoming of innovation.

Rogers presents a famous curve of innovation showing how early adopters begin the process of adopting new products or other innovations: 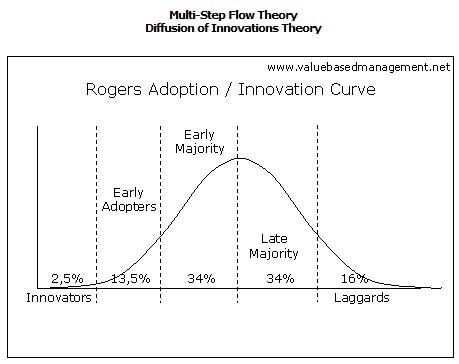 The innovation adoption curve of Rogers is a model that classifies adopters of innovation into various categories, based on the idea that certain individuals are inevitably more open to adaptation, than others. It is also referred to as Multi-Step Flow Theory or Diffusion of Innovations Theory.

The Diffusion of Innovations curve is useful to remember that trying to quickly and massively convince the mass of a new controversial idea is useless. It makes more sense in these circumstances to start with convincing innovators and early adopters first. Also, the categories and percentages can be used as a first draft to estimate target groups for communication purposes.

The distinction made above between innovations and settled markets is important in the business world.

The phrase “disruptive innovation” is well known. Wikipedia defines it this way:

A disruptive innovation is an innovation that helps create a new market and value network, and eventually disrupts an existing market and value network (over a few years or decades), displacing an earlier technology. The term is used in business and technology literature to describe innovations that improve a product or service in ways that the market does not expect, typically first by designing for a different set of consumers in a new market and later by lowering prices in the existing market.

This is the proper marketing plan for zero waste innovations.

John Curl in discussing the building of cooperatives as a superior way to organize our economy has this to say:

“Ours is essentially a non-violent rebellion…. We need to build the new world and to the degree we are successful, the old system will collapse by its own weight. … I think a generation will rise to the challenge and create a better world for our great grandchildren.”

This is the model I put forward also.

You may notice that in the list above there are a number of fairly specialized items, which you personally may not be technically familiar with. That probably means that you should probably not look to do a coruscating, top level job with redesigning those products for their highest reuse potential. If you want to work with electronics, it is not enough to be well intentioned. You need to be, or have the help of, someone with a deep and broad knowledge of electronics. Otherwise you will miss obvious possibilities. The same thing obviously goes for chemicals, or plastic parts. But it also goes for simpler things like paper. If you want to work with paper (including as a recycler) you should expect to read everything you can find about paper and eventually become an expert. You should know where your paper comes from, what fibers are used, what chemical treatment is used and what special properties your papers have. 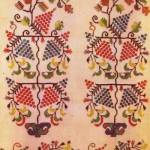 Some more lightweight projects (but fun to think about):

“The world is what you make it!” – song by Paul Brady

Here is one approach to a Zero Waste design for a small bridge across a river. What does this example teach us? Could we expand the concept to build a Golden Gate Bridge? Could we build furniture or cabins using this concept? What else can we learn from this? 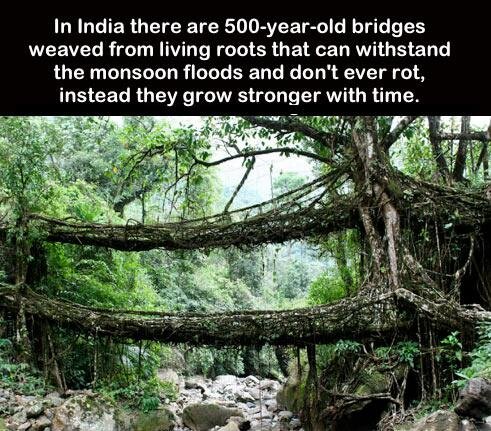